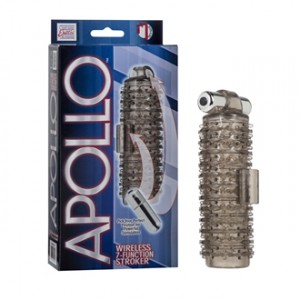 This month, as CalExotics Expert Sexperts, we were sent another great product to review. Just a reminder, each product is rated, by our testers (2 couples), using The Love Bird’s Feathers Rating Scale™:

“The hotter the product is, the more feathers it will take to cool you off!”

The new product we received is called the Apollo™ Wireless 7-Function Stroker. This a soft, tight, stretchy stroker that also comes with a removable vibrating bullet style stimulator. This textured stroker is also reversible which is great for added sensations. The stimulator can be placed on the top or side of the stroker and it has 7 functions of intense vibrations, pulsations and escalations.

The Apollo™ Wireless 7-Function Stroker requires 3 watch size batteries and 6 batteries are included. The stroker is made of TPR or Thermoplastic rubber and the stimulator is made of ABS plastic with silver plating. The Apollo™ Wireless 7-Function Stroker is body-safe and phthalate free. It is also waterproof, so you can have lots of fun in or out of the shower! It’s available in two colors – blue and smoke (like shown here).